If you are new here - welcome! I've been very slack with my posting on this site and will not make more promises I won't keep - but I'm usually very faithful with a post on the first Wednesday of the month. The IWSG has been of tremendous help and support to me over the years as I made my way, ever so snail-like, to publication. I appreciate everyone in this group who takes the time to see how fellow writers are doing, especially our doughty captain - Alex J. Cavanaugh and his crew of volunteers! Huzzah!

Summer is finally here and the green is gorgeous and unrelenting. My garden is doing okay although setting off for two weeks on my very fun book tour did it no favours. I was away the last two days at a friends and it was glorious to see her majestic gardens and hang around eating yummy food and chatting.

Now to the question at hand -

July 6 question - If you could live in any book world, which one would you choose?

I'd  live in the book I'm currently reading. For the last several weeks I've been living in the world written by Elizabeth Jane Howard - the world of the Cazelet family set in England. There are five books in the series called The Cazelet Chronicles and I've just finished the third. They start just before the beginning of WWII and end in the fifties. I've just experienced the end of WWII at the end of the third book Confusion. I have spent most of that time in Sussex at 'Home Place' the country home of the Cazelet family. Women are becoming aware that being pampered and cossetted has its price. The children (which I think Howard is brilliant at portraying) have known war for five years and not sure what to make of the new world. Theirs is a middle-class family, so this isn't the heavily servanted world of Downton Abbey, but they are mostly comfortable. At the same time I'm rereading an old favourite book set in the same period called The Camomile Lawn by Mary Wesley.  I wanted to reread this as she is a particular role model of mine having had her first novel (The Camomile Lawn is her second) when she was seventy. Hers is a slightly darker story than the Cazelet's but similar in many respects.

Now - in case you are misunderstanding me - when I'm finished these books I will not want to live in the book world portrayed. I only want to while I'm reading it.  I want to be in Kenya in 1916, or in PEI during the early part of the twentieth century, or China in pre WWI times, or ...well, you get the idea. I want to read books where I want to be there - maybe not ones that are too scary - I don't even like spending a night in Bangor, Maine though I have spent a few there. But for the most part - I'm in! I want to be a servant girl in Anne Boleyn's home at Hever Castle and roam the Dorset hills with Tess. And I love not having to sit in an airport to do so! I want to know what was likely served for dinner when Elizabeth Bennet was home from a long stroll and what was in Elnora Comstock's dinner pail when she attended school in the Limberlost. I want place details galore - the landscape and the house furnishings, the loos and the laundry arrangements - the whole thing.

And I hope that when people read The Crooked Knife that they will feel like they have travelled for a time to Labrador and experienced what that might be like at a certain time. I want readers to get lost in my world - don't you?

Here is a photo of Muskrat Falls in Labrador which is no more. As the song tragically says "Mr. Peabody's coal train has hauled it away."* or something like that... 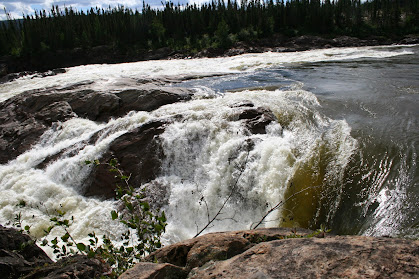 Agreed. The best part about reading is disappearing into the book world, any book world! So glad you enjoyed your book tour! Wishing you a happy summer!

You make a really well-taken point, Jan. When you're reading a book, you want to be in that world - completely immerse yourself in it. When you're done, though, and you start another book, that new world should call. And I can't wait to read The Crooked Knife.

Yes, I love really getting into a book's world while I'm reading it. Glad your book tour went well.