woohoo it is 2021! first meeting of the year for IWSG

Purpose: To share and encourage. Writers can express doubts and concerns without fear of appearing foolish or weak. Those who have been through the fire can offer assistance and guidance. It’s a safe haven for insecure writers of all kinds!
The awesome co-hosts for the January 6 posting of the IWSG are Ronel Janse van Vuuren , J Lenni Dorner, Gwen Gardner Sandra Cox, and Louise - Fundy Blue!
Hi all dear writing and non-writing pals!
I'm writing this a few days early...because...well, I always do. There's lots  of things that I always do. That seems to be a side-effect of aging. One puts in certain protocols to prevent things slipping one's mind. Or this 'one' does. So when I get the notice of the next meeting - I go off and write it and post-date it. Then I can wake up on the morning of the 6th with a song in my heart, instead of a leaden bit of old porridge cemented together with the not-very-sticky glue of 'wasn't I supposed to do something?'
January 6 question - Being a writer, when you're reading someone else's work, what stops you from finishing a book/throws you out of the story/frustrates you the most about other people's books?
I read a lot of books. This last year I read eighty. The year before 120. I read lots of fiction, some poetry, biography, travel-memoirs and dharma books (about my Buddhist practice).  I mostly finish what I start, but I'm careful of what I do start because of that. Recently I finished a book but sort of wished I'd tossed it - but no - I'm curious as to whether someone can rise above a poor start. I'm not going to name this book and I'm not putting it on my Good Reads list either. I don't think it would be helpful for me to tell this person what turned me off. Not at this point. What was it? It was meandering that bored me. The author could have made this already fairly slight book slighter. Per* could have cut about 30% of it and it would have sung instead of sagged. I think the problem was that per wasn't sure what per was writing. It was a memoir of a certain time and the author kept going on about side-issues - which weren't in of themselves boring but they were distracting. So that's about it. I don't like filler. Which doesn't mean that I don't like descriptive writing - I do - but it must further the story - not spackle together the bits of it that do.
Note about my own writing: I'm not writing. Not a sausage! Not a crumb! Not a morsel! I'm not editing, revising, or even just playing in the world of words. I think I just need to go fallow for a bit. I really haven't been able to make myself write for a few months. I really worked hard for two years on Crooked Knife. I sent of queries I am quite pleased with in September (and a few since) and now I just want to hear from the world. I have a kid's book percolating but so far my pen hasn't touched paper. Maybe I'll start a series of linked poems but right now the thought of any of that is about as enticing as more turkey. Nope. Enough for now. Still a writer - just not writing. Bear with me please. Isn't that a nice phrase - bear with me? I think it means more than we usually attribute to it. I think it means to help me share the burden of my non-writing - help me hold that up and be okay with it.
Here is a photo of a dried Queen Anne's Lace pod that I took recently. I've loved my walks amongst dried golden and frosted weeds and grasses this winter. It looks like a cage of stars... 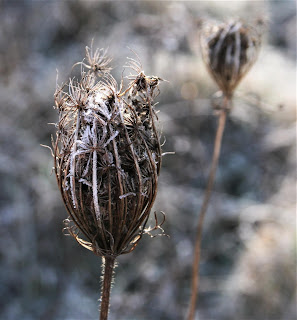 *per is what I'm using for personal pronouns as in  Marge Piercey's Woman on the Edge of Time. It is used for all personal pronouns and therefore no need to memorize what people's choices are. I don't have the bandwidth for that.
Posted by Jan Morrison at 6:00 AM

Happy New Year, Jan! You know, I'm the same way about doing things in certain ways. It gives me a sense of order, and I like that. And I'm glad you mentioned 'filler.' I get annoyed by that, too, and right now, I'm trying to make sure that the story I'm working on doesn't have too much of it. Thanks for the reminder.

It sounds like you need some time to recharge and fill your writing well. There's nothing wrong with taking a break!

I get very irritated with too-lengthy books, too. I've ditched a couple lately for that very reason...or skimmed to the end.

Happy new year to you! It's interesting that you always write your IWSG posts in advance. I rarely write blog posts in advance, so if I forget or more likely can't find the spoons to do a post I was supposed to do, I just skip it. Thankfully I've only skipped IWSG once since starting it in January of 2019.

When you are ready to write, you will.
Meandering annoys me. Long, drawn out stuff that just doesn't go anywhere or mean anything.

Meandering loses me too. I hope you get your writing groove back. Happy New Year!

Why am I not surprised you refer to Marge Piercy? Such a stunning poet and novelist. Just the mention of her name by one of my favorite bloggers has made my day (and here in the US, this day needs A LOT of help).I know your words will come back to you when your time is right. I have been writing poems which are helping me process grief. And on my current novel, among other work required, I have charged myself to read sentence-by-sentence to see what words I can remove from each one. No extraneous fluff allowed. Happy New Year, Jan.

We all need to take fallow periods to recharge from time to time. Sometimes forcing it is the worst thing you can do. I also dislike "meandering". Some description and scene-setting is good but it can't get in the way of the story.