It is another meeting of the Insecure Writer's Support Group! If you are new to my blog, you should know that this is a group that posts once a month on the topic of writing. It is our aim to support one another to be the best we can be and to quell the inner voices (monkey mind) that tells us we should quit our passions and take up something safer - like rock-climbing. I've been a member of this group for over a decade (I believe) and still look forward to the sharing that happens with this virtual coffee klatch. So have a look at what I've been up to and then click the link above to get to a clickable link of other writers. We are a diverse and friendly crowd.

When I last left you, dear readers, I had just sent off Crooked Knife to be appraised by an editor I had contracted for that purpose. She sent me the appraisal two weeks ago. I am thrilled with her assessment of the manuscript. Thrilled. Don't misunderstand - I have a good six months of hard work ahead before I even get to the copy edit BUT it is work I understand and she believes it is very marketable. She has given me a list of next steps and I am working on the first of these steps now. I will talk to her for my follow-up consultation call next Wednesday. I will do the steps needed, begin the next revision and then, in all likelihood, contract her to a substantive edit. I really like her approach - it is so straightforward and she works in a way that compliments my particular process. I am over the moon with this turn of events. I will keep you posted and if she is open to it - I will give you a link to her website.

February 5 question - Has a single photo or work of art ever inspired a story? What was it and did you finish it?

Hmmm... I do have a story to tell here. Quite a number of years ago I went to an art exhibit at a gallery in the village of Peggy's Cove. For those of you who don't know - Peggy's Cove, Nova Scotia, is one of those places on the planet that absolutely takes your breath away.  To quote a tourism site "Arguably, there is no site more iconic in Nova Scotia than Peggy’s Cove, the small fishing village just 40 kms from Halifax. The lighthouse perched on top of the rocks, overlooking the rolling waves, is one of the most photographed and visited sites in the country." It is also one of the most painted sites in Canada. The quaint fishing village, the lighthouse atop a strange landscape of immense boulders, and the vast ocean makes it very exciting to capture.

I live about twenty minutes from Peggy's Cove and never tire of going for a cup of chowder at the restaurant closest to the stunning view. This time, however, a woman I know had an opening at one of the galleries in the  tiny village. While I was there I overheard the artist talking to another artist about her younger days of making art. She said she had been a "rock walker". Huh? What was that? Apparently in past years the government had hired folk to walk over the huge rocks that make up the landscape of Peggy's Cove in order to warn folk not to get too close to the edge. The cove regularly takes the lives of feckless types who get too close to the edge - in stormy weather the waves come from three directions and the unwary can be swept off to their demise. It is mostly impossible to rescue anyone who goes off the rocks into the briny deep, but I had never heard of the rock walkers. I proceeded to write a mystery based on a young artist who had secured one of these jobs. As you might imagine, especially for landscape painters, a well-paid job wandering around this gorgeous place, was just the ticket for a poor, starving artist.
Writing the mystery put me close to home for research and I am pretty happy with the results. However, the novel never found a home and I think it needs a bit more work. I have it in mind to go at it once Crooked Knife is being marketed.

The thing about this story that may be helpful to other writers is that inspiration can come at any time, any place. As soon as I heard the term "rock walker" I was hooked. And yes, that is the name of the novel. Here is  a mock-up I did of the cover. 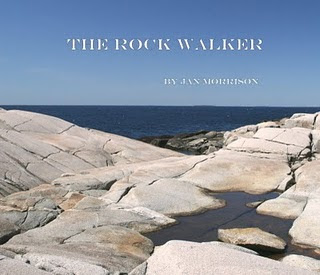 So excited for your good news on "Crooked Knife!" That's wonderful.

So happy that you have positive momentum on The Crooked Knife! How wonderful that you have found an editor that "fits." I love your story about the rock walker, and absolutely adore your mock up cover of THE ROCK WALKER! Peggy's Cove. Hmmm. Putting that on my bucket list.

Getting positive feedback is such a tonic, isn't it, Jan? It gives you the momentum to keep going through the hard work of revision. Thanks for sharing your Peggy's Cove story, too. I've often been inspired for short stories by places and situations, but not a novel. Hmm...I ought to be more open to that.

"rock walker" has quite a ring to it -- I can imagine a story already!

I do agree. Inspiration can come at any time. It just pops up. The other night I was sleeping and woke up suddenly at 2 a.m. and a story was going through my head. I reached out for my iPad and began writing. If I hadn't, I would have lost it.

Wishing you all the best.

I am glad you're having a great experience with your editor and you're thrilled with the process. :)

Rock walkers. First I've ever heard of it. But like rock climbing, it makes sense as they walk across the rocks.
Awesome news from your editor. And you have a such a good attitude about it.